There is no doubt about it. My introduction to the Cabazon Dinosaurs was through watching Pee Wee’s Big Adventure a million times in Junior High. I loved that movie. So in December of 2016 while roadtripping in California, I was ecstatic to be able to visit the dinosaurs of my youth. (You know what I mean!)

When I arrived, there were tons of people milling around. The parking lot was full and getting pictures without strangers in them proved to be a challenge. That was unexpected. Before I arrived I imagined myself as being the only person there. Turns out – the world’s largest dinosaurs are hard to resist.

The highlight of my stop was being able to walk up inside of Dinny’s belly and buy a couple postcards. When’s the last time you were in the belly of a brontosaurus?

Look how much the dino complex has been built up since Pee Wee filmed. Here is a streetview showing generic chain restaurants and nonsense followed by a scene in the movie that highlights how empty everything seemed in the 80s.

The Wheel Inn Diner is no more. As Curbed LA says, “Large Marge will NEVER SEND ANYONE to the Wheel Inn AGAIN”. It shuttered in 2013. I suppose the remaining EAT sign is a consolation prize.

“Come on, Simone. Let’s talk about your big but…”

The Laser Time Podcast posted a blog called 5 Awesome Appearances of the California Dinosaurs which is pretty neat. They dug up pop culture uses of the dinos in movies and print. Definitely check that out!

This stop was a tick on the ole bucket list!

Exactly one year ago today, I set off from Long Island on Sunday morning with a bug in my ear to see a concrete railroad bridge in northeastern Pennsylvania. It’s called the Tunkhannock Viaduct or the Nicholson Bridge.

At the time it was built in the 19-teens it was the worlds largest concrete structure. Today, almost 100 years later it is still an impressive sight. I dare say it is arresting when you head north along US 11 and it comes in to view.

Why would I ride over 200 miles each way to stand in front of some concrete bridge? The answer is simple. I don’t know.

What is it that you get from being in the presence of something inanimate versus simply looking at pictures of it online or in a book? Again, I don’t know. But… there is something.

Sometimes it seems like my trips to things sprinkled around the country answer questions that I don’t realize that I’m asking. Standing in their shadow makes me feel something. I guess maybe that’s what I’m after – to feel something. To know something with the cells of my body before my mind has time to scramble it up.

It’s nice to see a place that is proud of the hallmarks of their community. Something about it gives me a lovesick envy.

And away we go.

2015 proved to be a year with dramatic highs and lows. But when all is said and done, I’m here on the last day of the year, closing it out with hope and possibility holding each of my hands. I’m grateful to have you here reading, listening, offering advice and being my friend. Thank you.

Wishing you all the things your heart desires in 2016. Be brave, friends. Embrace your awesomeness.

I said goodbye to old motorcycles. 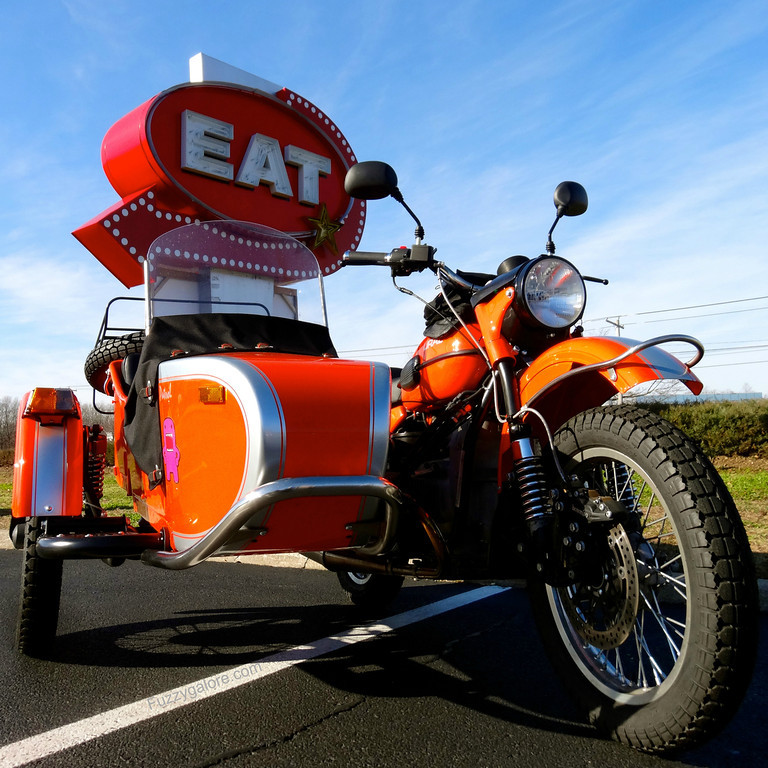 I said hello to new ones : KTM & Bonneville – just because.

I made new friends who inspire me with their badassery:

And I managed to tick a few things off of the ole lifelong pursuit of fun list.

Bicycle across the Golden Gate Bridge

The Gemini Giant stands sentinel on Route 66 in the town of Wilmington, Illinois. For as long as I can remember being aware of muffler men, he has captured my imagination as being special. Is it the handsome green space suit? The helmet? Maybe his name? I can’t say for sure.

What I do know is that he is my favorite muffler man. That’s just the way it is. To some people these fiberglass giants all look the same. They think, what’s the big deal? They don’t do anything. They just stand around being the same as every other muffler man who stands around looking the same.

But, those people would be wrong.

The town of Wilmington is 900 miles from my house. In the scale of this big, wide world it’s not that far. Hell, people ride further than that in a 24 hour period. But, the truth is – sometimes it seemed like I would never be able to get there. I mean, it’s easy to hop on a plane, fly to California and do some sightseeing around San Francisco or LA. A trip like that seems to have a much more concrete purpose, a more definitive destination. You don’t question that you would be able to fill your time there with a million things. When would I ever have a reason to find myself in Wilmington, Illinois?

In October of 2015, I finally made my way to Wilmington.

It might sound silly but when I approached the spot where he stands I actually got a flutter of excitement. Especially when my GPS stopped marking his distance in miles and started marking it in feet. I may have said “Ohmygahhhhd” out loud. Maybe.

When I pulled into the lot and parked, I stumbled around for a few minutes just gawking.

To a parking lot of a closed down restaurant!

Reconciling what you’re seeing with what you’d imagined is a curious feeling. Arriving at knowing versus wondering is almost a physical sensation.

Though I was dazzled by his gorgeous green suit, that I did something that I set out to do was as important than seeing the thing itself. Maybe more important.

I just now realized that the Gemini Giant is secretly smiling underneath his helmet. I know someone else like that.

Thankfully, I don’t have a football jammed up in mine, though.

Just wanting to is reason enough to do things.

Just yesterday I read an article that pointed out what the author saw as a flaw in the bucket list process as it is often portrayed in contemporary culture:

As popularly conceived, however, the bucket list is far from being a reckoning with the weight of love in extremis, or an ethical or moral accounting. More often, it partakes of a commodification of cultural experience, in which every expedition made, and every artwork encountered, is reduced to an item on a checklist to be got through, rather than being worthy of repeated or extended engagement.

Personally, I think this is oversimplifying the process. We can’t know what goes on in the minds and hearts of men in the quiet moments of their lives. So they said out loud, “crossed that off the bucket list”? Does that mean that whatever that thing, that act, that item from their list was doesn’t dwell deep in their imagination or actively fuel their curiosity for the rest of their days? It could be a moment in time that sets fire to a personal passion that you, as an on-looker, know nothing about.

Or,… maybe it IS gamification of life experiences.

The best part of this conversation, I suppose, is that I don’t have to give a shit about what other people are doing.

On our recent trip through the Alps, I was able to visit several things that are on my bucket list. My list, which is very meaningful to me, helps me stay organized. It helps me to remember that there are things in the vicinity of where I am that are beautiful and wonderful though maybe less than obvious.

One stop in particular seems to have created more curiosity and questions about a man than it answered. I’m not quite ready to write about it yet, so I’ll leave you with this until then…

We were in the belly of the beast.