Over the weekend, I stopped and had a chat with this motley crew. Aren’t they a handsome bunch?

Dinosaurs are a hugely popular fixture in the roadside Americana landscape. Their popularity seems to transcend visitors’ age, social rank, gender and every other qualifier I can think of. I have yet to meet a person who harbors a white-hot hatred of dinosaurs.

My roadside holy grail of the dinosaur kingdom was visiting the Cabazon Dinosaurs in December 2016. Climbing up the stairs into the belly of Dinny was glorious. Until scientists finally clone the wooly mammoth, I think Cabazon will be my high-dino-watermark. 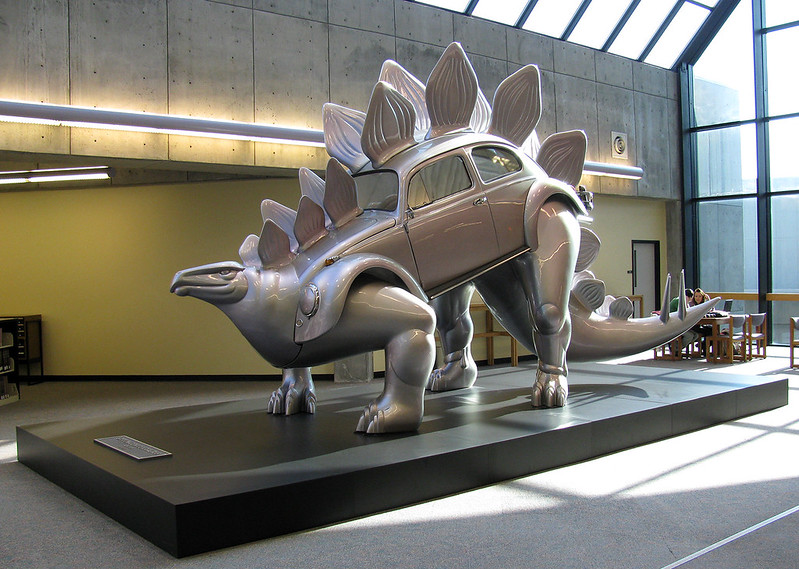 Should I find myself in the neighborhood of Highland Heights, Kentucky, I do want to stop in for a peek at “Stegowagenvolkssaurus” by Patricia A. Renick. It was a bonus location in the 2017 Iron Butt Rally. And I have to admit, it looks pretty awesome.

Atlas Obscura just ran a feature about the ubiquitous roadside dino. Check it out:

Documenting America’s Long, Venerable Tradition of Roadside Dinosaurs
Photographer John Margolies spent nearly 40 years documenting what we now know as “roadside Americana”—the gas stations, motels, drive-ins, and diners that attracted road trippers with quirky signs and kooky architecture. In 2017, a year after Margolies died at the age of 76, the Library of Congress made its Margolies holdings available online—more than 11,000 color photos of food-shaped restaurants, catchy neon signs, and an intriguingly large number of dinosaurs.

2 Replies to “A Nod to Roadside Americana Staple – The Dinosaur”