…in a long line of One Finger Salutes. 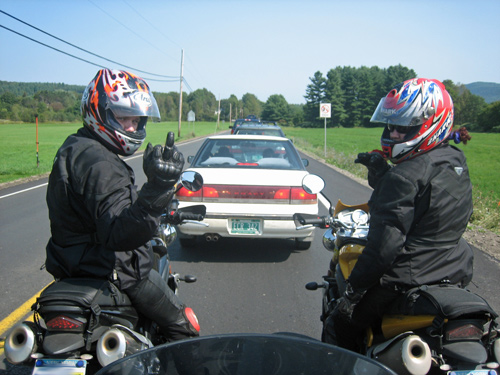 Choosing the correct salute is imperative. My go-to salute is often a well-timed combination of honking followed by a single finger coupled with shouting vulgar obscenities that would make a sailor blush. Sadly though, most often they can only be heard in the confines of my own helmet. Now, if I had say a pimped out megaphone helmet, indeed it would be more effective.

For small trespasses there is of course the ‘Throw Your Hands Up While Shouting WTF Are You Doing?’ but I often feel that leaves too many open ended questions. I KNOW what they’re doing. They’re being stupid.

In to each life a little rain must fall and with that sometimes you are indeed the focus of someone else’s honk. Over the years I have found the coup de grâce when you are the honk-ee is the tried and true ‘Double Finger While Laughing Maniacally’. The double finger indeed says it all but then the sweet sting of laughing in the face of the agitated honker seems to really kill them. +5 for the jerk off motion. It’s a beautiful thing.

Your mileage may vary.

2 Replies to “One of Many: The Single Finger Salute”