I guess this will be the dawn of a new chapter in my personal book of riding. 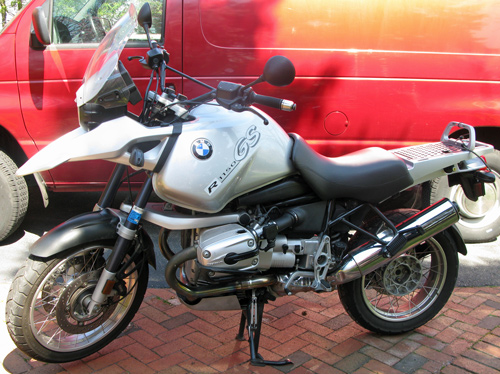 Kenny was a dear and picked up and rode the bike home for me last night, while I had to hurry off to a very glamorous PTA Fundraiser. (Yes, PTA – I wear many hats, what can I say?) I didn’t get to ride the bike or sit on it or anything it last night. I just got to watch him zip away on it. He looked like he was having fun.

Enter this morning, 6:45am. Me, alone in the garage with this giant, hulking mass sitting smugly on it’s center stand. Up to this point I have two major fears regarding dealing with this bike. Dealing with it’s top-heavy weight while I’m on less than flat, level ground and… putting it up on its center stand.

So I knew the first task in my mental check list would be to figure out how the whole center stand business goes. It seems pretty straight forward, right? Step on the stand, gentle tug back, upsy-daisy! That’s precisely how it looked when the previous owner did it. That’s how it looked when Kenny did it. Let me tell you, that wasn’t how it worked for me on my first try. I think my problem was, I went in defeated. Intimidated. So what did I do? I went half way and let the bike slowly lean to the right and *donk* into the garage wall. F*ck. I didn’t commit to the task. I was scared I would screw it up and it became a self-fulfilling prophecy.

There was no damage of any kind, the bike didn’t tip over or anything, it simply leaned against the wall just enough for me to have to shimmy over between it and the wall, sit on it and lean it back on to its side stand. And of course, it was just enough to send my already shaky confidence directly into the toilet. I stomped into the house feeling defeated and like a bit of a jackass and had a cup of tea. For those of you keeping score at home: Bike: 1 Fuzzy: 0

I sat in front of my computer and Googled up getting a GS on the center stand. I read a couple posts and tips and figured I’d better get back out there and give it another try. I need to master this! The thing that made it happen for me was the very thing my brain was screaming against. Tipping the bike away from you a little to make sure both legs of the center stand are touching the ground was it. Introducing the bike to the damned wall within the first 5 minutes of touching it made my brain go… DO NOT LEAN IT AWAY FROM YOU!!! But, leaning it away and firmly keeping my foot on the stand leg allowed it to go up with just a tug back on the frame. I’m pretty sure I heard angels singing at that moment. I practiced it about 10 times before heading off on my inaugural ride to work, most of which I spent worrying about getting it up on the stand when I arrived 8o)

I’ve still got to mount the side bags, handguards and my topbox. I’m thinking it’s probably a good idea to get a feel for her without any extra tipping weight. I’m pretty excited to see what comes next. Wish me luck!