At the time, this 2005 scorched yellow Triumph Speed Triple was my main squeeze, my do it all bike. Though it was a little tight on space, traveling on it wasn’t really that much of a hardship because it was all fun, all the time. Just look at that huge tankbag!

This was taken in New Hampshire on my way to Mount Washington.

Set back from the road in Hinsdale, New Hampshire is a fabulous house that is covered in license plates.

When I say covered… I mean covered. Isn’t it wonderful?

The house is no longer lived in, but another one was built right next to it. That is where the family now resides.

When I walked down the driveway, the lady of the house came to the screen door before I even made it to the front stoop. I said a quick hello and asked if it would be alright if I took some photos and looked around.

She was very friendly and said to absolutely look around. While we exchanged small talk, she went on to tell me that people actually steal some of the plates off of the building. That struck me as sad. I just don’t understand people who do things like that.

Even though the behavior of some must be disheartening, I’m glad that she still welcomes strangers to come by and look at this sweet curiosity. It must have been a labor of love.

Some people are perfectly content to live their lives in the same town, in the same city. My great aunt lived on the same street her whole life. 75+ years on the same block! I on the other hand am plagued with a nagging wanderlust. I want to be moving all the time. This often presents a problem because I can’t just pick up and leave any time I want to. Perhaps those are the very things that keep small moments away on the bike feeling special. The dangling carrot is always so delicious.

Living on an island, as I do means I’m always crossing the water to get away. Be it just for the day or for a week – when my wheels roll across a bridge I know I will be going to a place that I am not from. There is something exciting about that for me.

6 Bridge Photos from my Travels:

Just came home today from a few days on the road in the car with my daughter. We stopped off at Clark’s Trading Post in North Woodstock, NH.

Inside the grounds, they’ve built a replica of a garage that was apparently on Main street called Avery’s. Inside there were a few old Indians on display as well as a 1927 Ace and a 1926 Henderson in the Firehouse.

How do these old bikes get lost in the shuffle and turn up so many years later? 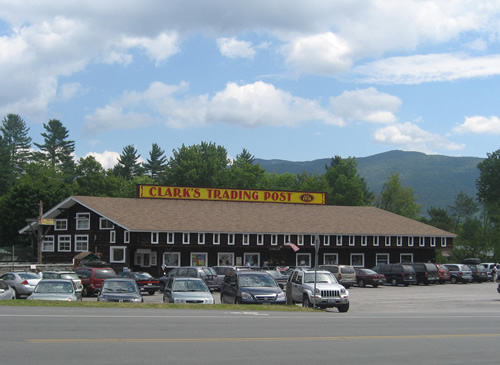 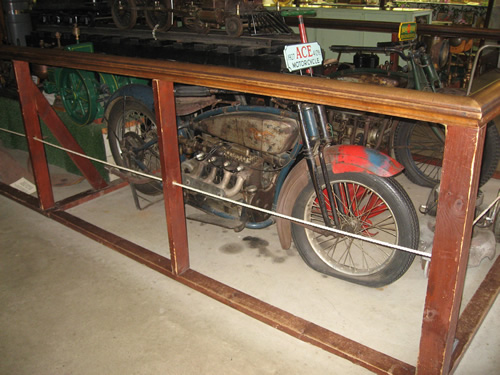 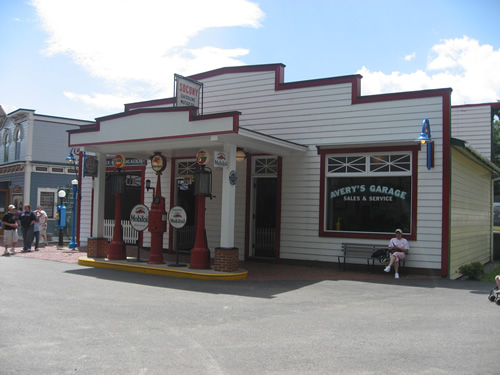 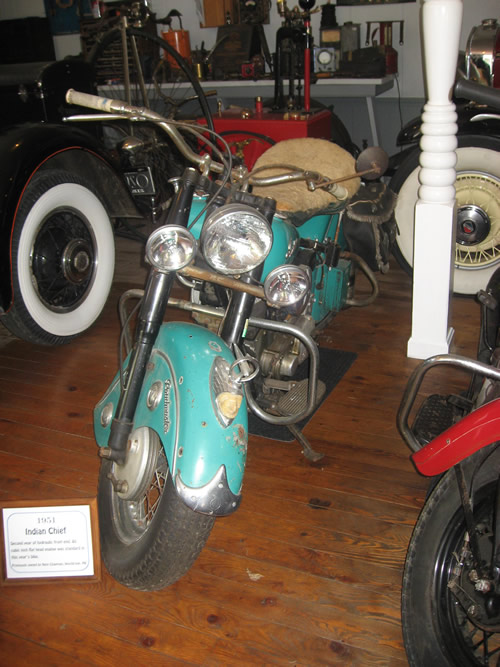 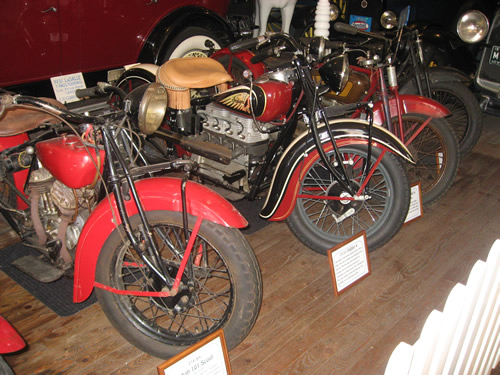 I woke up to overcast skies. My motorcycle sat alone in the hotel parking lot near Killington, Vermont. It’s a familiar lot that is so often filled with the smiles, bikes and happy faces of my riding friends. Today it was me all alone. I was going to go ride the Mount Washington Auto Road. That would be one more tick off of my life’s To-Do List. 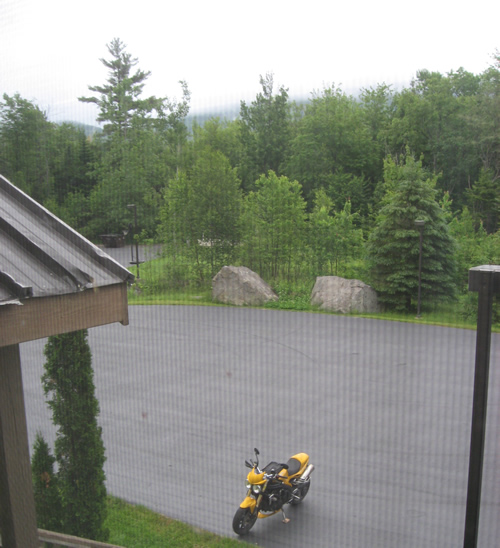 Vermont seems to be a rolling succession of picturesque little towns and villages that proudly line their main street with American flags on every telephone pole. It really harkens to a seemingly long forgotten piece of innocent America.

Between these small towns is a weathered yet charming string of farms and rural homesteads. I quietly wonder how people are so lucky to have the strength to choose a life that appears to be so much less cluttered on the surface. I don’t want to know the reality of what their lives are like, i want my dream. 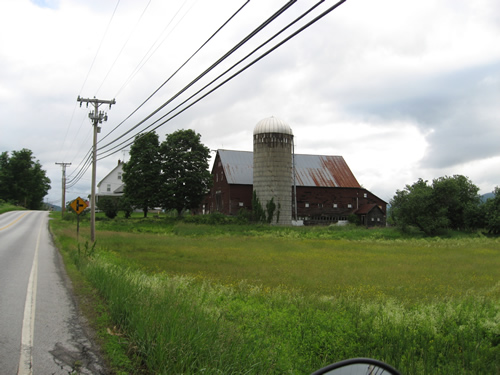 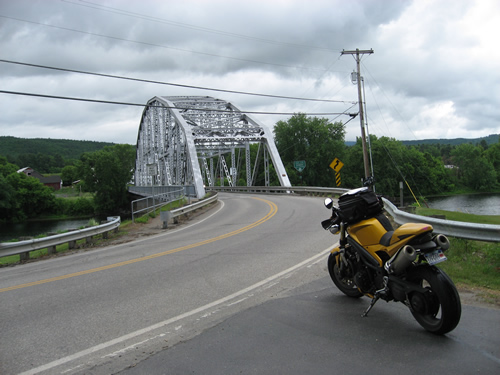 Sometimes you know you’re walking this world on your own, don’t you? 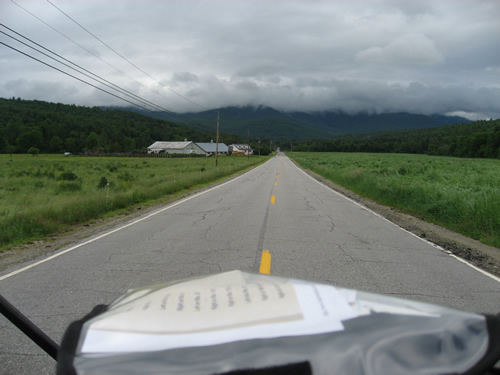 According to Roadside America, Warren, NH is the only town that apparently has a Redstone Rocket on display. Goshalmighty, if that isn’t reason enough to stop for visit, I don’t know what is! 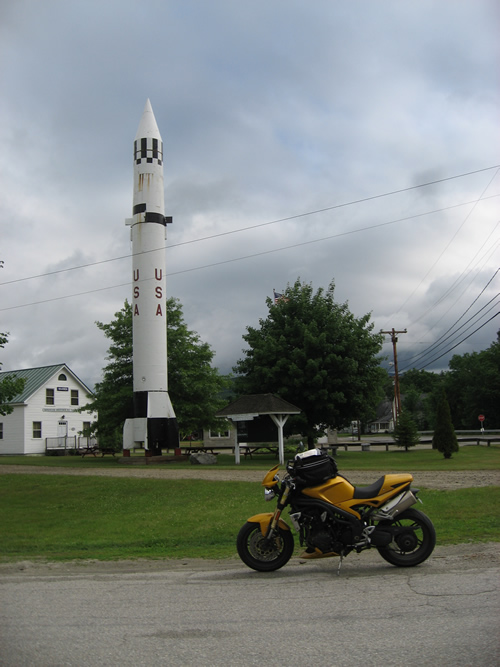 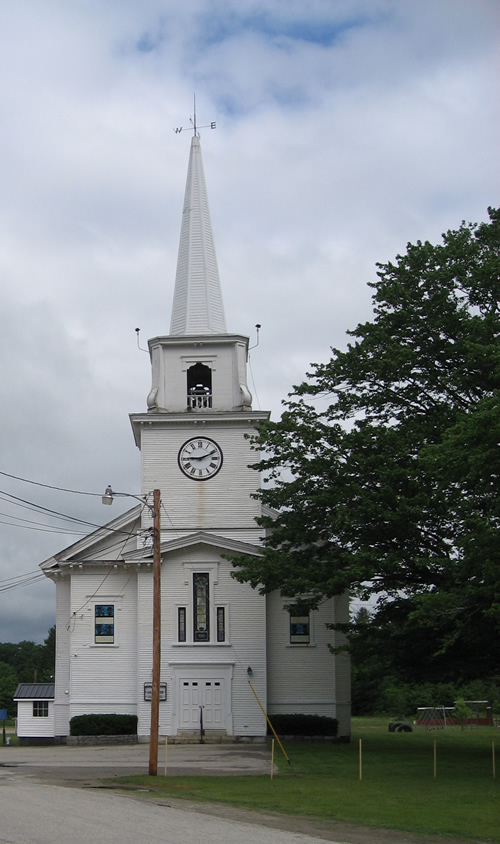 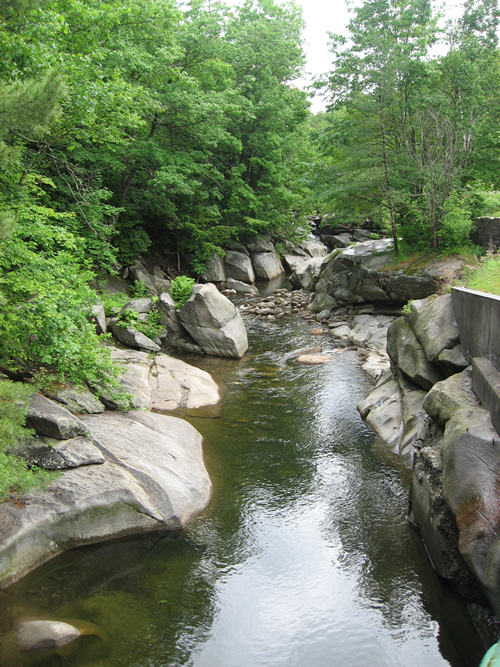 Fog on the Kanc.
I set the ole self-timer on the camera and also took a pic of myself standing there. But being the buffoon I am, I somehow managed to capture myself doing what appears to be ‘The Robot’ in my raingear. Perhaps if I’m feeling masochistic later I will post it up. 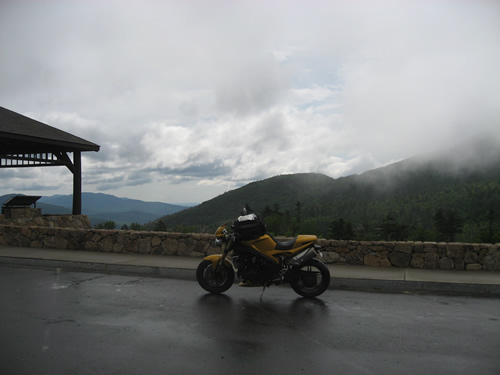 Here it is. My moment of glory! 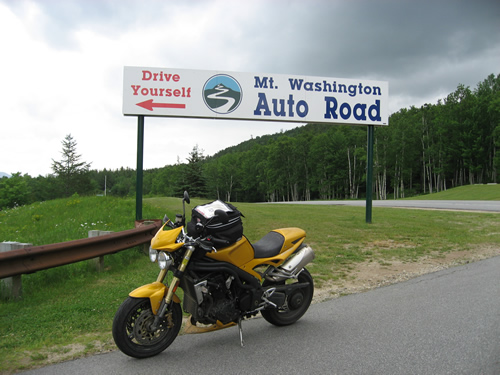 This is as far as I made it up the Auto Road.

The very nice lady at the tollbooth sheepishly walked over and said, ‘I’m sorry, honey. We’re closed to bikers today.’ It took about 20 seconds for what she was saying to register in my brain. Apparently after Laconia Bike Week, the dirt road had become degraded and unsafe to bikes and was being repaired.

So… I visited Mount Washington from across the street over a turkey sandwich. Typical.

There it is, up in the clouds. So close, yet so far. 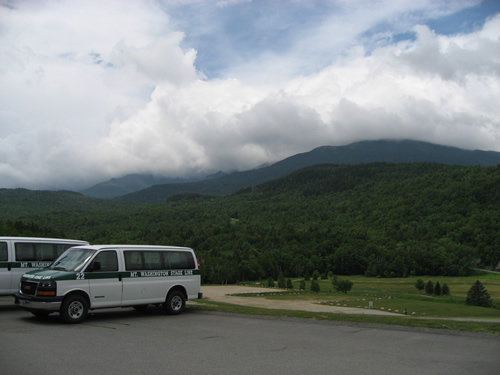 I called Kenny and gave him the lowdown on my aborted summit attempt. He kind of chuckled and said, ‘Of course.’ As I stood there looking at the mountain, the weather began to roll and tumble. 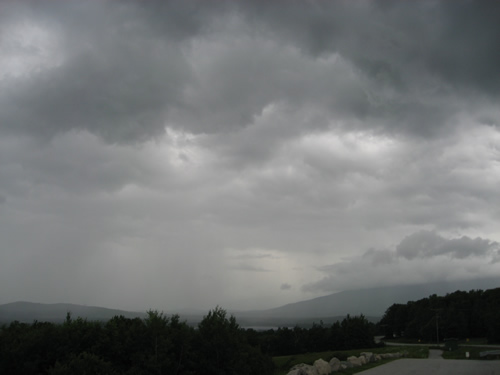 Maximus: ‘At my signal, unleash hell!’

And it did. The rain dogged me all day from this point on. This was the last pic I took trying to escape the onslaught. 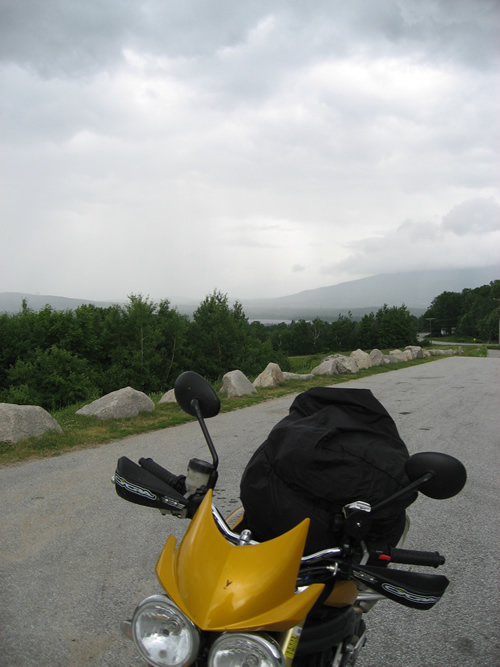 There were so many spots I rolled past and said, ‘I’ll snap a pic on the way back.’ It proved to be foolish on my part. The thunder and lightning kept me moving. Lesson learned…maybe.

Moments in time are fleeting. Stop and smell the roses.