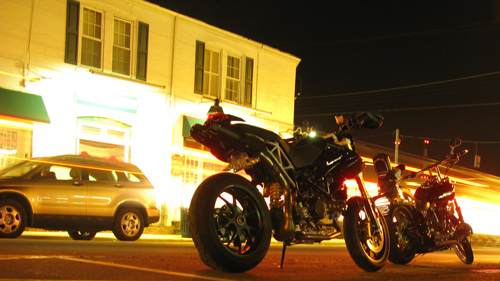 I just find the Ducati Hypermotard to be such a sexy beast. I forgot my tripod last night so I couldn’t get any good close-ups without using a flash. The guy who owns this one drilled out parts of the exhaust cannister tips and I think it looks so awesome. I’ll try to get some shots tonight. Remind me to bring a tripod! 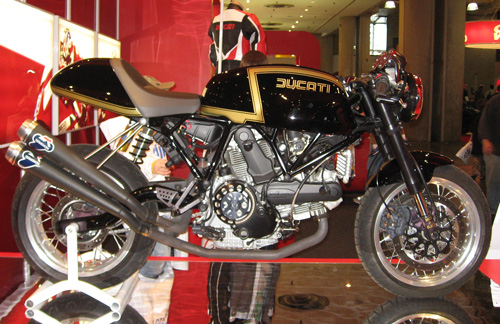 This gorgeous baby really does make me feel like climbing the rope in gym class. 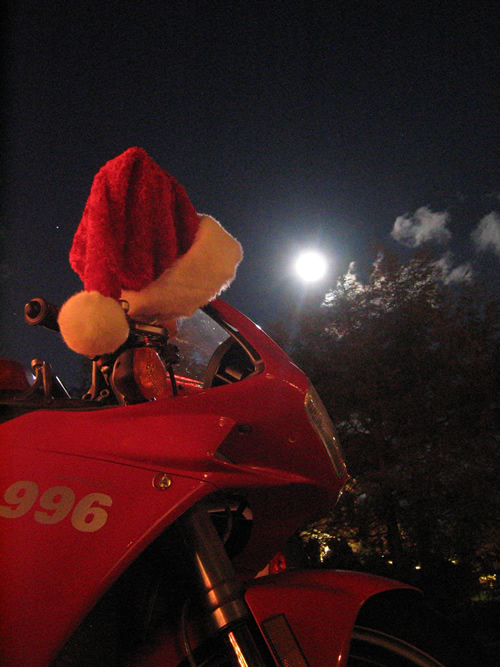 You really know that you’ve really just about had it with cabin fever when dropping a bike off for service constitutes a ‘wow, that felt great’ ride. 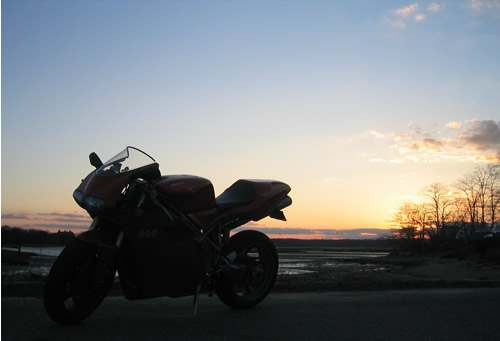 Come on already, spring! Sheesh. I guess i shouldn’t really complain. It was mid 50s today. After work, we headed out for a quick spin on the bikes before dinner. Man, i swear as soon as that sun starts to go down, the temp sure drops fast. We toodled around in the sandy backroads at dusk. 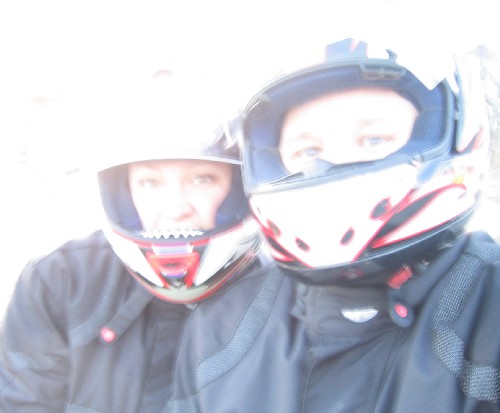 The 996 let’s you know that it doesn’t want to play nice in the lowspeed stuff in a hurry. Sensitive throttle, torquey torque, 40 degrees and a sandy, twisting road will remind you how fast you get rusty over the winter. Comparitively speaking, the Triple is just so easy to ride. I am repeatedly amazed at how confidence inspiring it is. The 996 feels like it would just chew you up and spit you out. 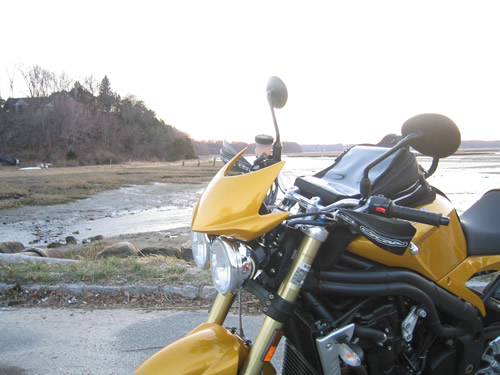 The 996 – she’s still absolutely gorgeous in my eyes. As Kenny pulled up next to me on her, I just couldn’t help but feel happy just looking at her. A classic beauty. Apparently Kenny agrees. He tried to hump my bike. WTF, man? ‘You a veddy bed man, Jeddy!’ 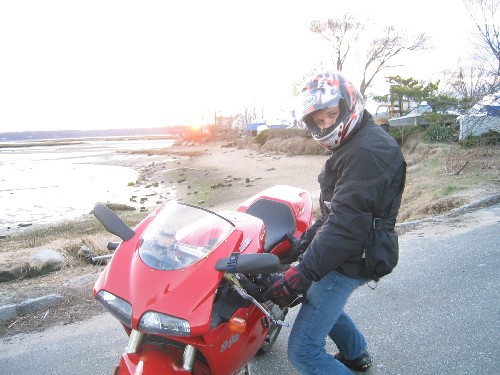 Last Saturday, I was feeling a bit blue. More lonely than anything. I headed out into the heat around 3:00 and met Hotdog, my partner in crime, for a nice afternoon ride. We met in White Plains, which is at the half-hour point for both of us. We live an hour apart now. After cooling down in a Dunkin Donuts for a bit, we headed up route 22 into Westchester’s winding roads. Each mile that we covered towards the north brought darker and heavier clouds. After about an hour, it was clear that one of us would be getting soaked on the way home, so we peeled off at the thruway. I headed for the Hutchinson Parkway and Hotdog headed west.

My ride for the day was cut short. Damn. Here I am lonely. Again.  Tick, tick, tick. The hours are going by. The sun goes down. At 9:30, I look out my window. Huh. It’s the moon. I guess that means the rain just sailed right by. I head back out to the garage, much to the disappointment of my dog, and get the Monster back out. I love riding that thing. She’s so comfy. Out into the dark, I go. Heading towards the beach. I mean, that makes sense right? Go to the beach at night by yourself.

The air was cool and it swirled around me like tickling fingers. It filled up my lungs and made me feel small. I felt like a speck in this huge universe. There weren’t too many other cars out. It was very unusual. Just my little headlight burning down the road. As I approached the beach, the air became thicker, heavier. The most delicious smell of honeysuckle surrounded me. It was so incredibly sweet and succulent. It made me want to eat it. It followed me along, fading and returning throughout my ride.

The Ocean Parkway was empty. Again it was just me and my headlight burning along. The sound of the Duc, humming. Over the dunes and into the horizon, a storm lit the sky sporadically with red flashes of light. Above me, a big movie-like moon came out to see me. There is that honeysuckle smell again, and the sound of the Duc, humming. Bump, Bump, Bump, the breaks in the highway.

I was blue. Lonely. It was the pits. But, as each mile passed and I saw the simple but expansive beauty of the shore, the sky, the sweetest smell of honeysuckle, and the storm on the horizon, and I felt silly. It was almost comical that I had the audacity to let small petty things bring me down. There I was, fortunate enough to enjoy the solitude and peace of the night, on my motorcycle. Therapy on wheels. You can’t beat it.