We’ve all heard the phrase time and time again. Loud Pipes Save Lives

Strangely enough it’s only the people who have loud pipes who seem to decree this. Coincidence?

The clever boys and girls who make up the dry-clutch sportbike set have their own cutsey version of the saying: Loud Clutches Save Lives. Loud mouths don’t save lives very often. Nor do loud patterned Hawaiian shirts. Rarely do you find a loud mouth in a Hawaiian shirt saving anyone.

What do you think? Loud Pipes: Do they save lives or do they just annoy the crap out of your neighbors?

On our trip to California in June of 2008, one of our pit stops was to the famous motorcycle hangout The Rock Store. Apparently in the course of a weekend you never know who might turn up there from celebrities like Jay Leno and Arnold Schwarzenegger to the average guy just out for a cruise on his Ducati Desmosedici.

While some of the locals would rather be stabbed to death by a spoon than hang out there (ahem, Novos) it was great to see it with my own eyes. It is a great people watching spot; a slice of motorcyclists life from far away.

The first time that I sat on a Triumph Speed Triple at the 2000 Cycle World bike show in New York, I pretty much knew that one day I would own one. The idea of the Speed Triple sat simmering on the back burner of my brain for 5 years.

I Love You But This Just Isn’t Working Out

I had been struggling to deal with riding my Ducati 996 as my jack of all trades bike. As much as I may have desired this bike, as much as it may have been what I thought was the motorcycle of my dreams, it just wasn’t working out in reality. Its focus made it beautiful and raw.  That same focus kept it from being a friendly real world, all-day bike. It was silly of me to think that I could put up with the pain the care and the expense that was required to make it do a job it wasn’t designed for. Coming to terms with such realizations was difficult. It was an admission to myself that my dream wasn’t all it was cracked up to be or that I was misguided in my thinking. There was some guilt involved in that. It was a bitter pill to swallow.

The final straw in my exclusive relationship with the 996 came during a long weekend trip to Vermont.  Though I had long since replaced the clutch slave cylinder and put adjustable levers on the bike I still suffered from having tired hands when riding. Kenny was often kind enough to trade bikes with me to give my wimpy mitts a rest. Just before heading east on freshly paved route 118 in New Hampshire, I swung a leg over his Triple. The next 13 miles made up my mind for me. Finding a delicious balance of speed, handling AND comfort all in one place was a real eye opener. I was sold. I went home from that long weekend in September of 2005 and bought the Speed Triple the next day.

Can’t Judge a Book Just by Looking at the Cover

Initially I didn’t want the yellow S3. I didn’t really care for the color. As it turned out it, it was all there was to be had save for a blue one which I liked even less. So I bought it anyway. In the last 4 years I’ve really grown to love its funky gold-ness – it’s become “my” color.

I love this bike as much as I did the day I brought it home. Maybe even more. I have a deep appreciation for the way that it feels, the way it sounds. It feels like home. We’re kind of peas in a pod: funny looking and a little bit odd but people like us anyway.  If you give a not so pretty girl a chance, maybe she’ll surprise you. 😉 Though I may casually date other bikes, she’s the apple of my eye.

A few weeks ago while doing something completely unrelated to motorcycling I happened to spy this motorcycle sitting in a garage. Unfortunately, I was not able to get myself into a position to take a clean side photograph of it, this was the best I could do. After doing a quick search around the web it would seem that this is a Ducati GTL though whether it is a 350 or a 500, I do not know. With no one around to ask questions about the bike, I came away with nothing more than a few bad pictures and some very romantic daydreams of cruising along the Amalfi coast.

Any info would be appreciated!

This fella on the awesome Ducati 750 GT was kind enough to stop and let me grab a shot of him on it, on Sunday morning at the OBI: 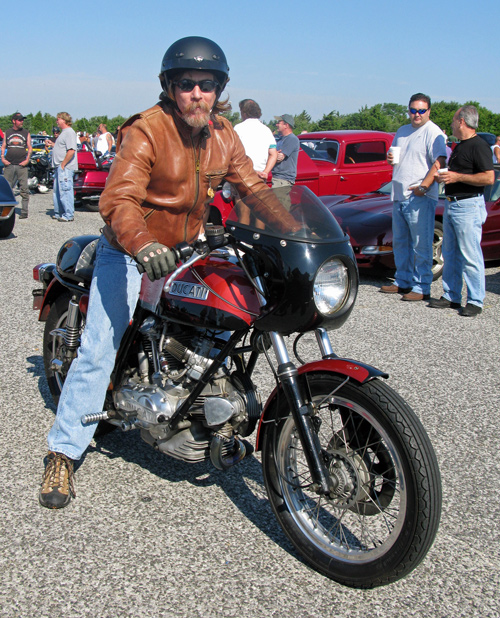 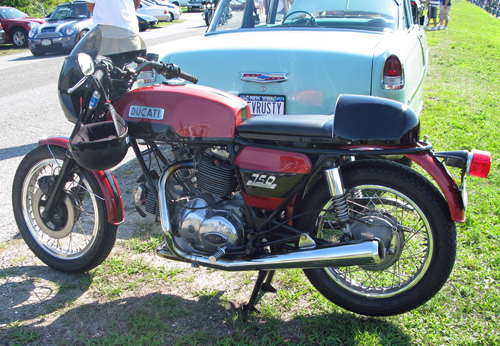 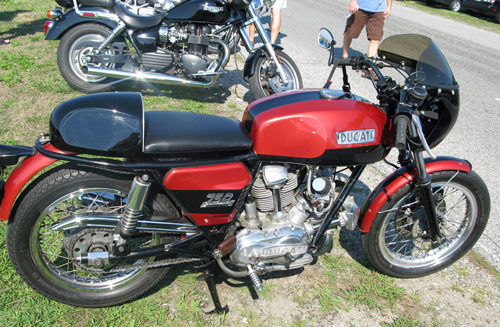