On Wednesday morning while I was driving to work tucked behind the rain-spattered windshield of my car, a thought came to me clear as a bell. It was so clear that I asked Siri how far Catoosa, Oklahoma was.

Oklahoma?! What the hell is in Oklahoma, you ask? Well, the Blue Whale of Catoosa, of course. 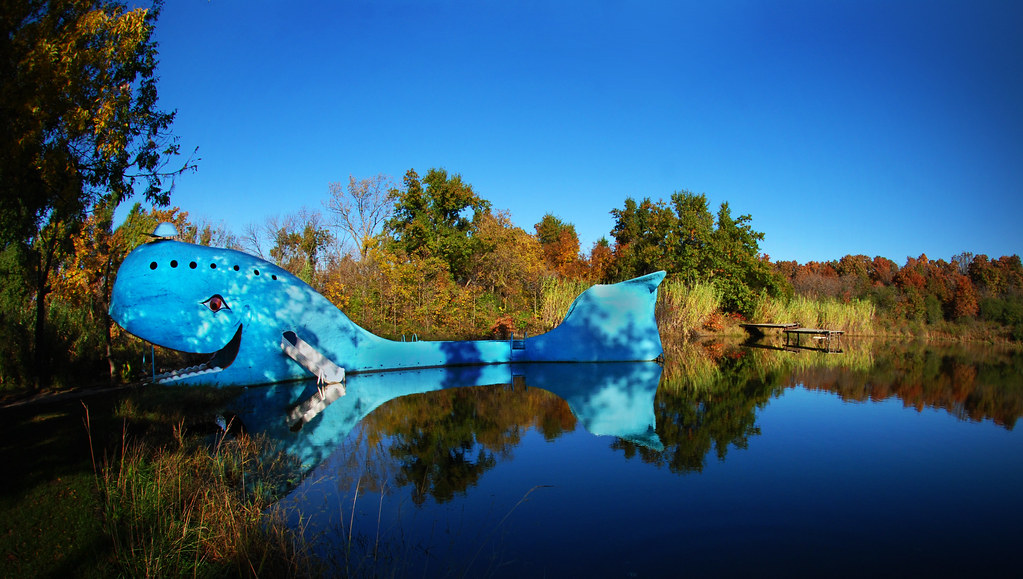 The most direct route from my house to the Blue Whale involves 1,400 miles on the slab. ::sad trombone::

There would be a lot to see between Long Island and Oklahoma. Especially if I took the backroads or even mixed highway legs and 2-lane roads. Still, I’d have to want to see that stinkin’ whale pretty bad to entertain the idea. The last time I mixed highway and backroads to cover a long distance, I ended up riding about 800 miles for the day. I was messing around on local roads and looking at stuff all day and then pounded out hundreds of miles on the slab from dinnertime on. There is some misery involved in that approach.

I keep vacillating between do it! and don’t do it. How bad I want to do it – that’s the thing.

Ughhhhh, I dunno, I dunnnnoooooooo.

My imaginary version of you is on the other side of the screen saying… You’re an idiot. First of all, what’s the big deal? It’s just some dumb whale. Second, stop whining. Either do it or don’t. Just quit cryin’ about it.

Do something I want to – OR – sit around wishin’. Those are my two options. Why is this even a choice to wrestle with? And yet… it is.

[Saturday May 7, 2016] Yesterday morning, after I finished writing my post I got up from the kitchen table where I’d been working and walked to the counter. When I opened the cabinet to pull out a coffee mug, my hand settled on…

It wasn’t a conscious choice. It just sort of happened. I stood a 1 in maybe 15 chance of picking that mug out of the ones lined up on the shelf. The subliminal mind at work?

10 Replies to “I Daydream of Route 66 and Blue Whales”