I will be the first to admit that I will say things like, ‘Oh, bears are so cool. I’d love to see a bear!’ In passing these comments are meaningless but when you really consider seeing a bear close up, you just might feel entirely different about it.

When we were riding through Sequoia National Park I made it clear to Kenny that I needed a little space from the group. When you’re used to doing things on your own, stopping and starting a train of people can feel a little claustrophobic at times. With that, off I went on my own.  The gang still behind me but out of sight, I slowly moved along up the road towards the Giant Forest Museum feasting on the wonder of my surroundings.

As the road climbed and rounded a curve in my left peripheral vision I saw something brown bound out of the foliage. Given my limited scope of animal exposure, I had assumed in that split second that it was a deer. I came to an abrupt, shaking stop in the middle of the the uneven road and nearly dropped my motorcycle. My arms had instantly gone to jelly. Standing there momentarily was a small bear. It was about 20 feet away from me. I was stunned and completely startled. My auto-piloting brain was frightened.

The bear didn’t really think much of me and didn’t linger. It scurried its way up the banking on the right side of the road and slowed its gate to a meandering stroll. I could see a green tag on its ear as it turned around to look at me. I sat shaking in the middle of the road. Kenny pulled up along side of me and I pointed to the bear and he was able to grab a quick shot with his camera. 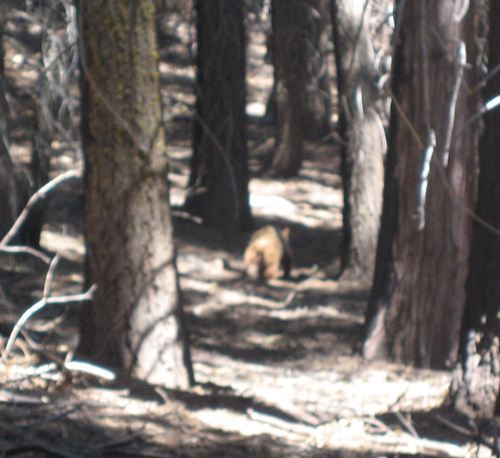 Its not a perfect shot – but its enough to say ‘look what I saw!’ My first bear. And in hindsight… hopefully my last from that close up.