The Crotona Midnight Run is a timed road ride in which riders must follow a distributed route sheet that you receive at registration time. The first Key Time is 12:00 midnight, releasing a rider every minute thereafter. The total run distance is 120 miles, which is divided into 2 legs with a 2 hour layover in-between. Average speed is for the run is 30 mph. There are 10 secret checkpoints scattered throughout the route to record your placement and progress. Points are deducted for arriving at these checkpoints either too early or late.

You are not required to participate for points if you do not wish to.

Initially, the Crotona Midnight Run just existed in my peripheral vision. Being that it is a local event, each year I’m made aware that it’s going on through a number of different digests or boards making announcements. Its full presence made itself known to me on Tuesday through an IM from a dear friend. It seems that my lovely boyfriend volunteered my dumb-ass up as a potential participant when he was asked if he wanted to give it a shot. Just like that, he threw me to the wolves knowing that it would be hard for me to say no to such an enticing offer.

Why would he think that?

Oh yea, that’s right up my alley all right!

So, Tuesday I’d pretty much made up my mind that yes, indeed with Kenny’s blessing I’d give it a shot. From this point on, I was filled with exctiment and a hint of anxiety of the unknown. I felt, for lack of a better word, scared. When those close to me asked exactly what I was scared of, I really didn’t even know. As I thought about it, I was scared of being cold. I was scared of feeling sleepy. I was scared of quitting the ride before finishing. But as the days wore on, the thing that I found I was most scared of was not trying it. I hate the idea of regrets. So with that, I was committed to do this thing, whatever was to happen… c’est la vie.

My first step towards staying warm. Bill lent me a set of hippo hands. Sure they look like giant ovenmitts, but you know… I just don’t care. I am definitely going to get myself a pair soon. 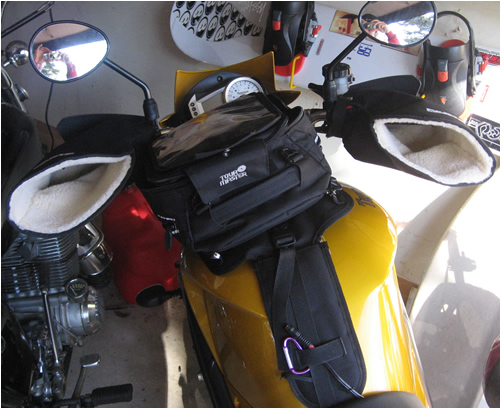 In the days leading up to the actual Crotona Run, my very patient and truly wonderful 1-man pitcrew, wired up my heated grips. The neatly placed rocker switch is unobtrusive and easy to get to while riding. The heated grips in combination with the hippo hands allowed me to wear my regular non-winter leather riding gloves, while still having warm hands through temperatures that dipped down below 20° 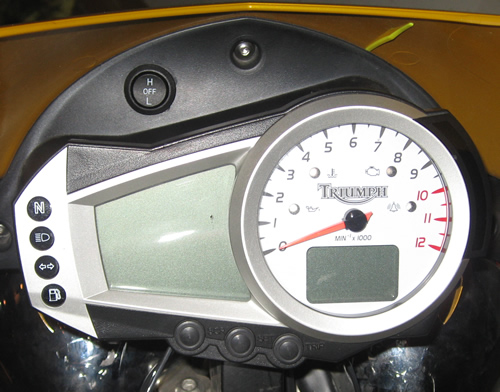 I must confess, I don’t really stay up very late. I’m pretty much an early riser who hasn’t seen 1:00 AM in quite some time. So with that, I *thought* I would try to sleep in or take a nap some time during the day on Saturday. No luck. My excitement and wonder was in overdrive. The hours until I was set to depart, flew by.

At 9:00 PM, I hug and kiss my family and tell them I love them. I take a deep breath and head out the front door it was time to go.
“Good Luck, Mommy!” my little one shouts. 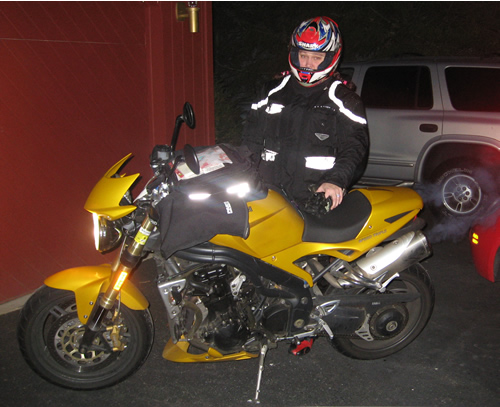 I buzz down the expressway to meet up with my lovely assistant for the evening, Bill. He’s modeling the Hypertext 1 piece from Firstgear. Its red and black motif is delicately juxtaposed to the silver of his Honda ST. With heated everything, this sport touring jewel hails from the the 2003 collection.

We head to the starting point, which is about 75 miles from here the Nathan’s in Yonkers. 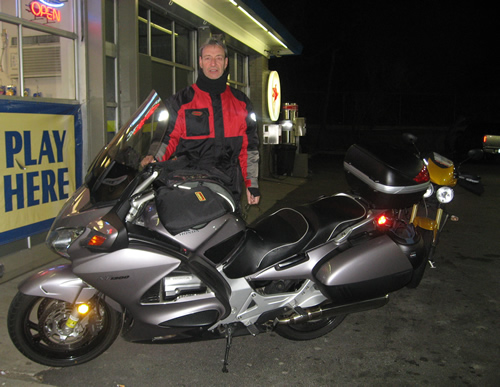 Check in & Registration for the Crotona Midnight Run 2007. This particular run appeared to be a great equalizer. Riders of all walks of life, all genres of bikes participating. The last I’d heard, there were about 60 registered riders. I may be mistaken, but I do not recall seeing another woman rider registering on her own bike. I found that to be curious.

[edit]02/17/07 Fuzz: Thank your Ramapo MCers for clarifying my error.
4 Ladies in total were out freezing their piggies that night!

We were given our numbers and route sheets. The booming voice from the man at the registration table says to me.. “Lucky 13, right here.” ::sigh::: Great. I hope its not a sign of things to come. 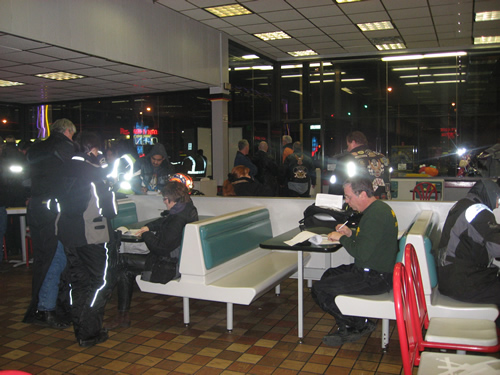 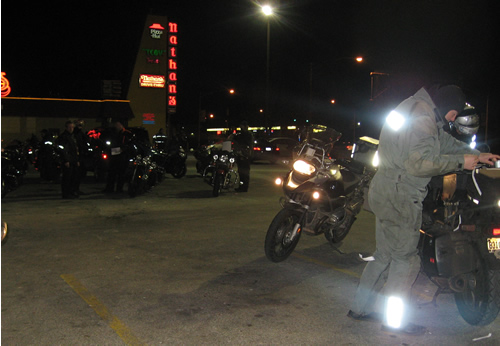 So at 12:13, I was released from the line and sent out into the cold dark night.

Off I go, memorizing snippets of the route sheet in sections. I have a habit of doing this in a little sing-songy way so that I don’t have to constantly read the route sheet. “Road X, Left…Road Y, Right…Left, Right, Right…” Portions of the route were through secondary roads that didn’t have much street lighting, so I had to re-sing my route at major intersections. I’m so glad we don’t use communicators in the helmets

Now remember, the designated average speed for this ride is 30 mph. Basically, given the mileage information plotted on the route sheet you can know exactly where you should be on the route at a given time. That concept didn’t last very long for me. Even when its cold out, its fairly hard to maintain 30 mph. Its so.. so… unnatural!

The 66 miles of leg 1 went smoothly. They seemed to go by in a blink, really. I ended up at the halfway point fairly close to the time I should’ve arrived, and in one piece. My anxieties were all gone. The unknown was now known. Nothing left to do but just enjoy the event for what it was.

Carmel Diner. Carmel, NY.
Around 2:00 am Arrival at the finish of the first leg. 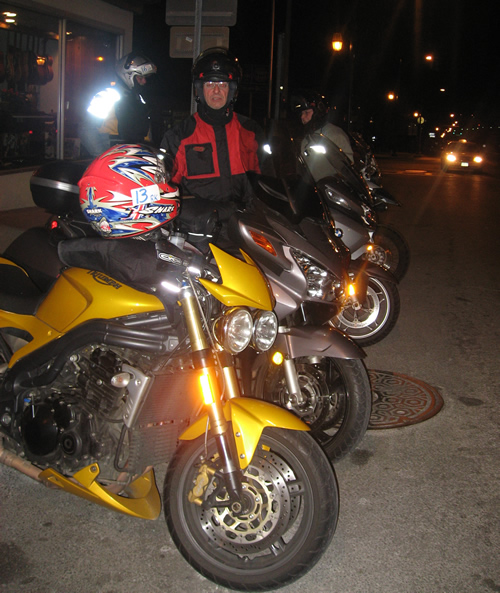 So here we are, at the 2 hour layover. People began trickling in. I had some coffee, warmed up and waited for my second leg key time at 4:13 am. For me personally, I believe that this 2 hour span where I sat idly getting warm in the diner really served to allow my brain to go soft and for my body to relax. I think I might have done better on the second leg had I not sat so long. 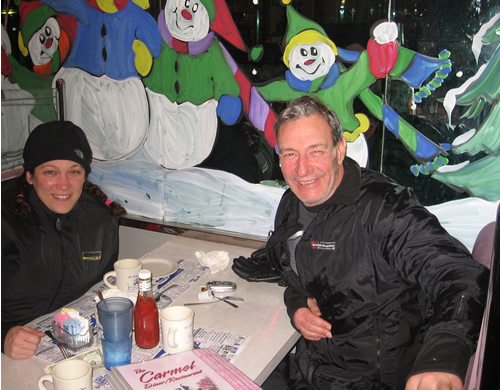 The bikes parked along Rt 52 in Carmel. 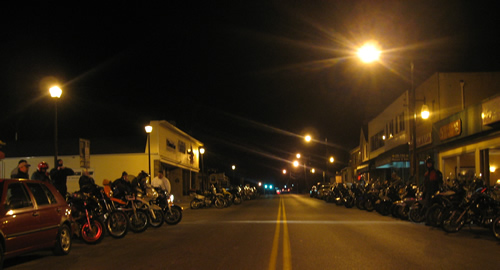 Time to gear up again and get moving. 3:45 am. About 14° F Bill’s ST stopped registering the air temp at 14°, it then went to just two dashes so after we left the diner on this second leg, it might have been a bit colder. I later heard someone say it was about 10°. 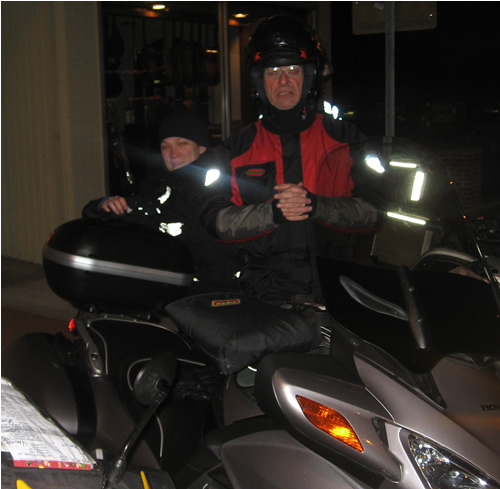 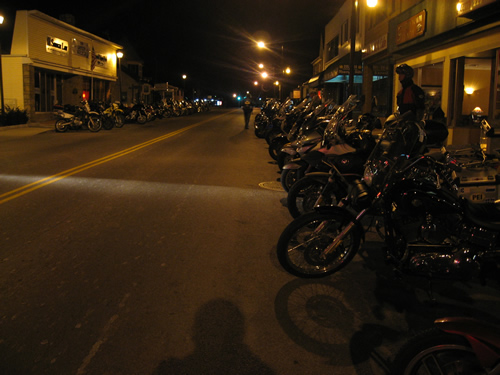 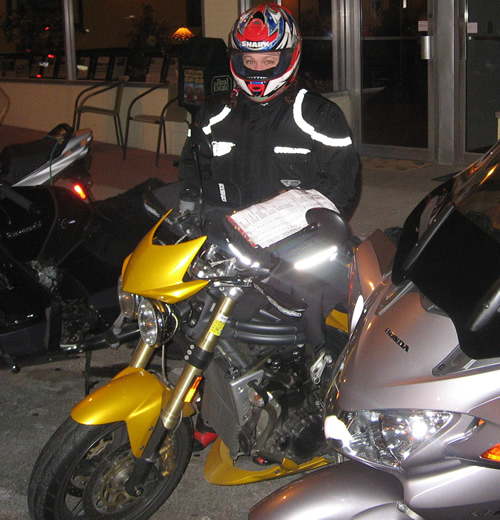 If you take one more picture of me dressed like a snowman, we’re gonna have problems. 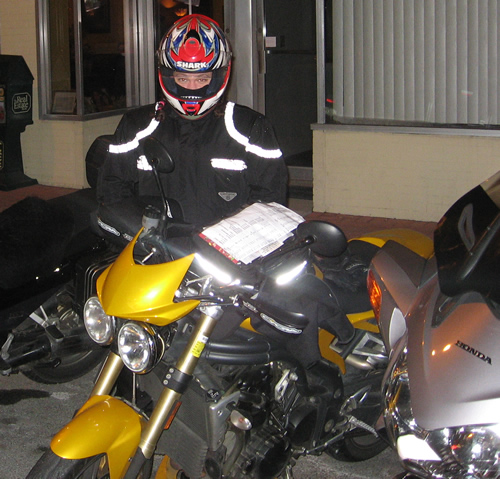 Much like the first leg, the second too went by fairly smoothly. I could certainly begin to feel the effects of the hour and the cold making me less sharp. I’ve never had this happen before, but the inside of my visor actually frosted over inside. I had to scrape the frost away and make sure my mouth and nose were covered tightly with my neckwarmer. That was something different

As Bill and I pulled across the finish line and had our numbers logged for the last time, the sun came up. We did it. …well, except for having to now ride 75 miles back home.

When I arrived in my driveway at around 8:30 am, the garage door magically went up. As it rose, I saw 2 pairs of feet standing inside to welcome me home. The person attached to the pink feety pajamas says, “Mommy! Did you win?!?!” And while I may not have even come close to winning the timed portion of the event, I still felt like I won something. I did something I wasn’t sure I could do, from start to finish.

Some people scoff at these sorts of rides and dismiss them by saying things like, “Why?” or “That’s stupid.” I guess for some it really might be stupid or might not make any logical sense to ride around all night in the cold. But for whatever reason, it made sense to me. I wanted to try something that isn’t friendly to the body to see if I was able to beat it, to overcome my own fear of the unknown. I feel pretty good about that.